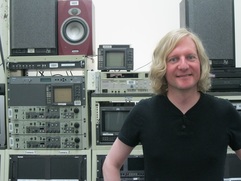 I am very proud to work on one of the best talk shows in the country, The Mary Hanson Show! I am in charge of setting up the stage and lighting before each show, and act as floor director and cameraman during tapings. Apart from working with Mary and her crew, I am a musician in several notable bands - and in addition, work in digital publishing. I appreciate reading, baking, and exploring and enjoying life.
UPDATE:  Nathan is now stepping into the Director's role as Floyd Child retires. 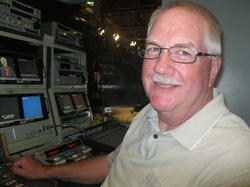 ​Mary recruited me to work on her crew in 1985 or 1986.  With no formal training or knowledge, I began working as a camera operator.  Over time, I learned graphics and audio.  Ultimately, I was asked to be her director.  Neither Mary nor I can recall the exact date, but I believe it has been close to twenty years that I have directed her program.

​In my other life, I worked in the field of labor relations, retiring from the National Labor Relations Board a number of years ago.  I also currently direct and work on other programs produced at Minneapolis Television Network; and I have served on the board of directors of MTN including two years as its chairman.  I also volunteer with the Minnesota Streetcar Museum as a licensed streetcar motorman; that means I get to wear a cool uniform and operate the 100-year-old wooden-sided trolleys for the Museum's visitors.  NOTE:  Sadly, Floyd is retiring from directing this August.  We will miss him a great deal and hope he comes back occasionally to plug in. 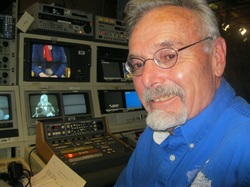 I am the Archivist. I transfer shows from videotape to DVD's in order to create an historical record of the show that will be donated to a museum. Mary has interviewed many notable Minnesotans since 1980. Her interviews are an important record of the ideas of Minnesota leaders during these years. I also assist the Director during taping of the show, and I am a camera operator. I have been a member of the crew since 2010.

I am a retired research scientist. I worked for 26 years in mining research at the Twin Cities Research Center of the US Bureau of Mines. I keep busy by volunteering. I am on the Board of Directors of the Waterjet Technology Association and also serve on the Supervisory Committee of Hiway Federal Credit Union. I have four daughters and three grandchildren, all of whom live in the Twin Cities area. 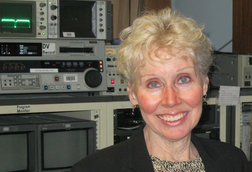 ​You have seen enough about me on this website, but in a nutshell, as Executive Producer, i get to select topics and guests, do research about the subject, bring in underwriting, send out press releases, develop schedules, etc.  I am deeply grateful to the crew for their work -- their professionalism, efforts to make the show as strong as possible, (sometimes with old equipment that presents problems), commitment to the goals of the show, and friendship. 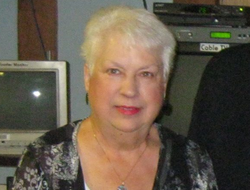 FROM MARY -- Lennore died in 2019, this past summer.  She was a wonderful person and loved and valued crew member for about 20 years.  We are leaving her bio up in memory of her.

​I am the Assistant to Mary, and am enjoying my third year preparing guests for their interviews and orienting them to taping details while on the set of the show.  I provide the extra set of eyes with regard to appearance and clothing (even applying powder to bald head or two).  I run interference for Mary communicating with the crew as needed on a variety of last minute details.  Setting up the food table with snacks for our crew and guests is one of my tasks.  My husband, Roger (now deceased) was also a crew member for several years.

My two daughters and their families live locally and I am fortunate to be part of my four grandchildren’s lives.  I enjoy the cultural richness of life in our Twin Cities often attending theater and music events, museums, films, book club, travel, and then there’s that hanging out at my lake cabin “up north”.

​​I am a graduate of Augsburg College in Minneapolis and have a professional background in teaching, education and international training software development, and non-profit community qualitative research.  I am a former president of my church congregation and continue being active or “giving back” in the community - serving in leadership positions for the Advisory Board of the Struthers Parkinson’s Center (Park Nicollet), the Augsburg College Associates Board, and the Board of Directors at my condominium.   Last June, I was honored to be a recipient of the “2012 Paul Silverstein Community Service Award” at Struthers Parkinson’s Center. 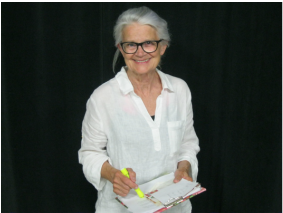 ​Currently director of Studio 1400, a collaborative of creatives
dedicated to beauty, fun and imagination. It is a design, product
development and sewing/knitting workroom specializing in prototypes and short run production. To be part of Mary's show is nourishment to my soul. 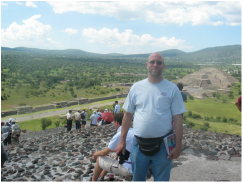 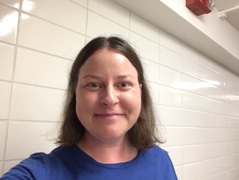 ​It is a joy to be a part of The Mary Hanson Show. Mary is a great interviewer with great guests. I am so happy to be a part of her crew! I really enjoy operating the camera during her shows. It is great to be part of the arts and culture in our community.

I have been working on The Mary Hanson Show for a short time but have loved every minute of it! I help assist production, camera work, audio, and am slowly learning the ins and outs of directing. I graduated from Minnesota State University, Moorhead, in 2014 with a degree in psychology and have been for the past two years directing and producing short films and promotional material with a company that serves vulnerable adults.

I have loved my time on The Mary Hanson Show both for it's upbeat, warm environment but also as an opportunity to continue learning how to produce content and the world of TV. 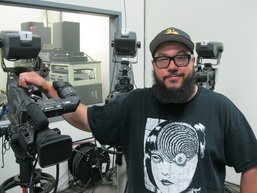 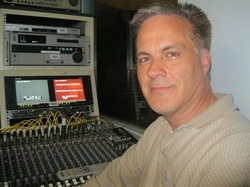 I have been with The Mary Hanson Show for about 10 years.  I am the audio person, and I have several years of experience with television.  At age 16 I was accepted into a television and radio program at Minnesota State University, Moorhead.

In college, I went back to Moorhead and majored in advertising and political science.  While in school I was a student instructor for television production courses.  After graduation I worked for an ad agency that did their own "in house" TV production.

After being out of college for a few years, I was offered a job marketing and managing a shopping mall and smaller shopping complex.  I now work in the mortgage banking field but still volunteer my experience and time to civic and non profit groups. 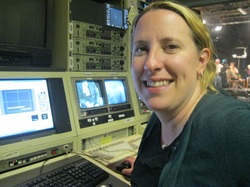 I create and run the “CG” or graphics for The Mary Hanson Show, coordinating these with the guests and with Mary.   This includes putting all the guest and show information shown during the show and the credits that run at the show’s end on the screen.  I also pitch in on taping nights wherever I might be needed.  I met Mary and started working on The Mary Hanson Show while a student in the University of Minnesota School of Journalism and Mass Communication in 1998, volunteering for close to 15 years. My “day job” is working on U.S. Customs and foreign trade business for a large Minnesota based company.  Note:  Janna is going to be working behind the scenes instead of CG work due to her schedule.  We thank her for ALL the years she has been our graphics person, keeping us all tuned in to the important details and assisting the director in the control room.   -- Summer, 2016. 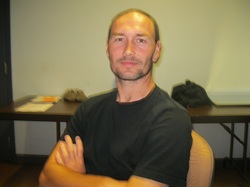 I started on the show not long after I moved to Minnesota from England in 2005. Since joining I have done almost everything, except direct (which I am in the process of being trained to do).  I also wrote the new theme tune, started Mary's online presence with her 'old' website, and run her YouTube channel. I guess you can say I am Jack of all trades... but hopefully master of some!

Apart from the show I am a stay-at-home Dad w/two young children. I run a religious studies website which I started in 1999 when I was a religion and philosophy teacher in England, have several You Tube channels which I create regular content for, write original electronic music and enjoy photography and creating 3D works of art. In my spare time I enjoy cooking, particularly Indian food, and also when the weather is good working on various wood projects both in and outside the house (such as replacing my window trim and building a playhouse for my two children). Life is busy, but never dull! 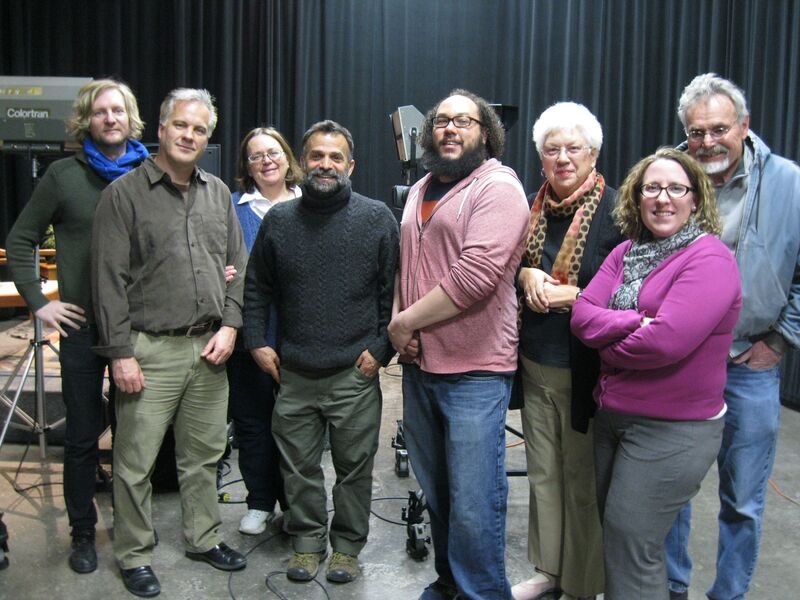 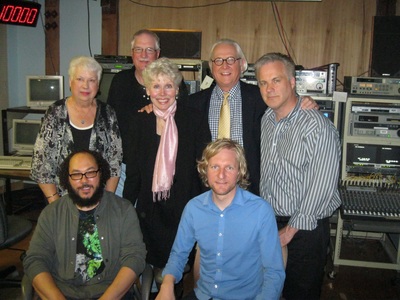 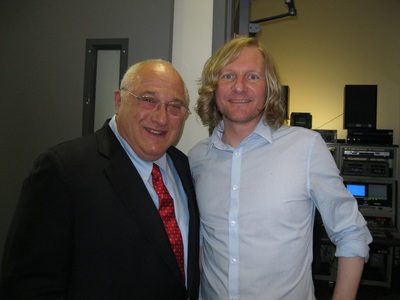 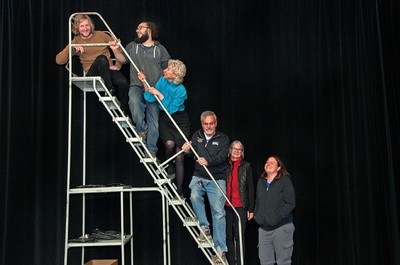 Past to Current Directors and Past Associate Producers

John See - (1982-1986) - Northern Cablevision, Rogers SW Cable, Eden Prairie, MN – The show followed John to Eden Prairie to keep him as our director and then followed him again to MTN, the Minneapolis Television Network